Here's a neat little vido of Steven Vance riding next to the LRT in downtown Phoenix.  Note that there are no barriers, fences or grade separation.

RWTs can work with light rail, too! 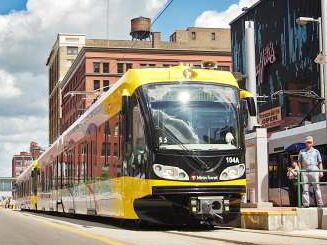 Another example of how well rails-with-trails can work is the Hiawatha Light Rail Line in Minneapolis.

The trail is part of the The Hiawatha Line,  an 11 mile light rail corridor that runs from Downtown Minneapolis to the Mall of America.  It includes stops at the Minneapolis/St. Paul International Airport.  The Hiawatha had over 10 million rides in 2008 with 30,500 per weekday.

The Hiawatha was opened in 2004 and the trail stretches from 11th Ave to 28th Street connecting the Midtown Greenway to downtown Minneapolis  Between 1800 and 2100  people use the trail per day. 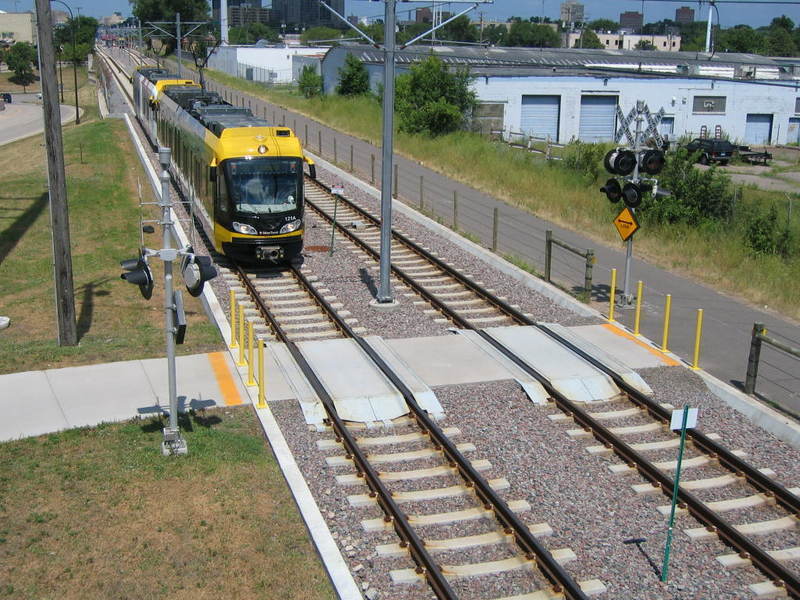 The trail is owned by Metro Transit.  Here are some shots along the corridor:

Here's a random video of a couple of guys riding beside the train, clearly paying little attention to the fact they are less than 10 feet from the tracks.  Come to think of it, why should they?

Click here for more photos of this beautiful trail. Along the promenade you'll see some of the best the city has to offer.

This is San Clemente Beach. Unfortunately, a rail corridor blocks access to these pristine beaches with more than 50 trains passing through the corridor each day. One more example of how rails-with-trails are safe, provide access and act as corridors to the places people want to go.

Why wouldn't this work in your town?

For a map of the rail-trail as well as all the other great trails in San Clemente click here.

According to generally accepted  experts, there are over 200 rails-with-trails in the US.  Their combined lengths total over 2000 miles.  People are happily (and safely) riding, walking and skating down the trails to work, school, home or for fun and exercise.  Everyone seems safe and happy. 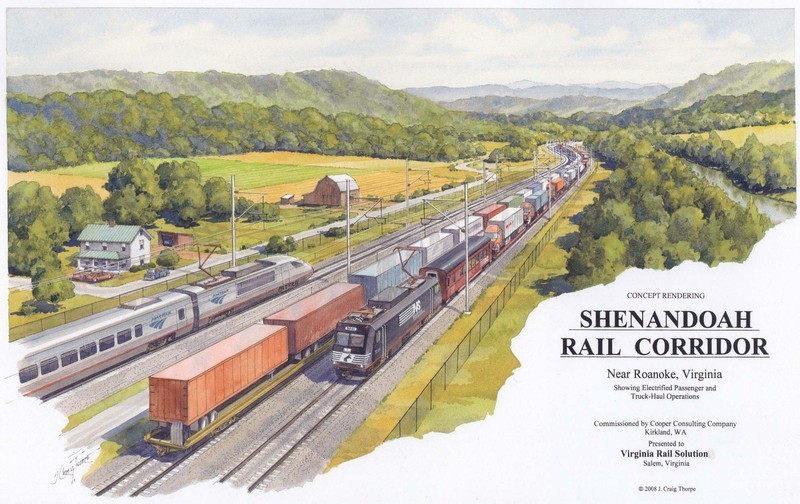 Click on the tumbnails to see an artist's rendering of upgraded rail corridor in the Shenandoah Valley before and after rails-with-trails.

Do you have a rail-with-trail in your backyard?  Would you be willing to share it - or at least a few photos- with us?

People seem to be doing a great job of hiding these little jewels.  Wouldn't it be nice to share them with everyone so they can see what it would be like to have a rail-with-trail in their town or city?

We decided to take the initiative and see what's out there and share it with the world.

Next to walking or riding the trails, let's share pics, anecdotes or experiences with those who want RWTs.  (And if you're tying to convince your local politician or  official that this crazy RWT idea isn't so crazy, we know it isn't!)
Take a trip to our flickr account for a virtual stroll...

This is about rails WITH trails....

"Could this be safe?" you ask.  It is, indeed.  Rails-with-trails (RWTs) have been around since the eighties and there hasn't been a single fatality and only a couple of minor accidents reported back in the nineties (O.K  -  there was a cow that broke through a fence and took the fast ride to a butcher shop on the front of a locomotive and there was the one knuckle-head  who rode his bike  under a closed crossing gate.  Don't worry - he wasn't killed - and his case was thrown out of court.  I hear he may have been nominated for a Darwin Award...)

Kidding aside, studies show RWTs actually make the railroad corridors safer; people don't walk on railroad tracks when there's a nice, smooth path 20 feet away and they cross the tracks where they're supposed to at designated crossings.  716 cyclists died on our roads in 2008.  I can tell you from experience, the railroads will jump up and down and declare the sky is falling, but any reasonable person will draw the proper conclusion from the facts.

Are you still not convinced that riding on a rail-with-trail is for you?  Contemplate this: would you rather ride your bike 15 feet from a train doing 30 mph on a pair of steel tracks, or choose to  ride on a curvy, two lane road,  24 inches away from a tractor trailer doing 60 mph,  while the driver is texting home to find out when the pork roast  will be served.   Case closed.

Why should the railroads do rails-with-trails?  For one reason: we, as taxpayers, deserve it.

The federal government is giving the railroads $8 billion to upgrade passenger rail corridors.  They're scheduled to spend billions more on upgrades over the next five years.  That's your money and mine.  And that doesn't even include bushel-baskets more money to upgrade the freight lines.

Railroad corridors are typically owned by private rail companies.  We upgrade their corridors, they ship more products and more people.  They make more profits.   We, the taxpayer, foot the bill to rebuild their tracks.  What's missing here?

Shouldn't we share the benefits with safe, direct paths to go to work, get some exercise, ride to school or go to the store?  Seems like a reasonable request.

Why use rail corridors for paths?  Frequently, these railways were laid out over a hundred years ago.  They typically followed the most direct path  - the paths of  least resistance, like valleys, river courses and streams to get from Village A to City B or Port C.  The railways were flat, straight and  and they connected towns, villages and cities.  Many of these paths are now surrounded by exurbs, suburbs and cities full of car drivers who follow those same basic routes to the center cities a century later.   As an added benefit, some of these railways follow incredibly scenic routes through the country side to those cities.

In many instances, large swaths of land were taken from landowners years ago,  whether the farmer wanted the railroad  or not.  Eminent Domain ruled  and frequently these corridors were cut wide, reserving land on either side of the tracks for future use. Perhaps it's now time to put that land to good use.

The days of cheap, plentiful, gasoline came, everyone bought a car (or two or three) and trolley cars, buses and mass transit in most city has nearly gone the way of the DoDo bird.  And so, too, may have the days of cheap, endless gas.

We need to start planning for tomorrows transportation needs.  It won't come as a surprise to many that walking and biking will become more familiar to most Americans.  (Considering that most American adults are overweight (68% according to the LA Times) maybe that's not such a bad thing.

Congress has finally figured out that upgrading our rail infrastructure - freight, passenger and high-speed - is a smart idea.  We agree.  We're simply saying that while we're upgrading our rail infrastructure, let's do things right and include multi-modal accommodations while we're doing it - bike and pedestrian paths - and make the most of the opportunity.

We hope you support the idea and choose to come along for the ride......